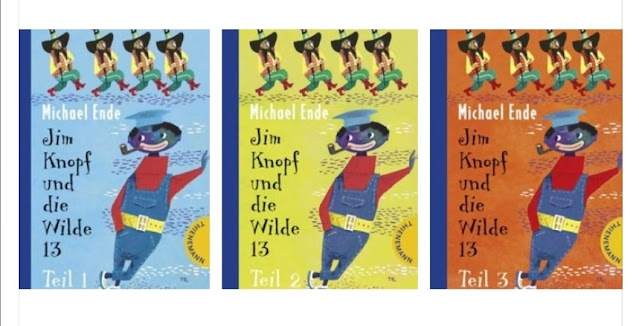 Jim Knopf und die Wilde 13 is the sequel to Jim Knopf und Lukas der Lokomotivführer is available as a set of 3 books( As Teil1, Teil 2, and Teil 3). It is written in German by author Michael Ende.

In this book, the story continues from the 1st book. Jim and Lukas return from their adventurous journey, and life on Lummerland returns to normal. One day, things turn when the postman accidentally bumps his ship into the island as he didn’t see it on time. The king decides to install a lighthouse so that such accidents could be avoided in the future. However, Lummerland is too tiny, and a lighthouse would take up a lot of space. In their previous adventure, Jim and Lukas had met Herr Tur Tur, a person who, when seen from near, appeared to have a normal height from far but looked gigantic. Because of this unique quality, they conclude that Herr Tur Tur would be the right man for the job and could be used as a lighthouse tower. They decide to bring Herr Tur Tur to Lummerland. Hence, the two set out on a new journey on the sea with Emma and Molly( the locomotive engines).

During their voyage, they meet mermaid Sursulapitchi and help her unite with her fiancé, the Schildnöck Uschaurischuum, by fixing a sea glow. They convert their Emma into a perpetual machine that can work on magnetic force and succeed in getting Herr Tur Tur to Lummerland. But they lose Molly, Jim’s small locomotive engine in the process. They look for it everywhere but are unable to find it. By this time, Frau Mahlzahn’s transformation into a golden dragon of wisdom is complete. Through her, they get to know that Molly is with the Wilde 13 ( a group of pirates). Taking clues from the golden dragon, Jim and Lukas set out again on another adventure.

Jim knows that he was brought to Lummerland in a basket and was saved by Lukas and Frau Waas. He longs to know who he is, about his family and his roots. At the end of the adventure, the secret about Jim’s family is revealed, and the story has a happy ending.

This book has a writing style similar to the 1st book, Jim Knopf und Lukas der Lokomotivführer and is full of quests that Jim and Lukas together undertake. The author describes the adventures in great depth, assuring a visual experience for the reader. This book is recommended for children between 10-12 years of age. The movie by the same name is also available.