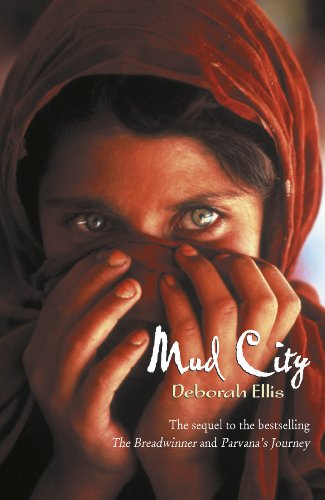 ‘Mud City’ is the 3rd book in the three-book series, the 1st being – The Breadwinner and the 2nd Parvana’s journey.

The story continues from the 1st book – The Breadwinner. One should read the 1st book to understand all the characters and the background story. ‘Parvana’s Journey ‘ ( Book 2) is about Parvana’s experiences, and ‘Mud city ‘ ( Book 3 ) is about Shauzia’s journey. Book 2 and book 3 don’t have any connection, so one can choose to read either after Book 1, depending on which character one finds more captivating. Having said that, both books are great, and I found them equally fascinating.

‘Mud city’ is the story about Shauzia after she leaves Kabul along with Mrs. Weera, hoping that she will find a safe exit into Pakistan. She imagines that from Pakistan, she would get to the sea and head towards the place of her dreams-France. But unfortunately, she lands up in a refugee camp at the border of Afghanistan and Pakistan. Although they are away from the extreme dangers faced under Taliban rule, the refugee camp has its problems – lack of food, sanitation, medical facilities, and, to top it all, a lot of ambiguity about the future. Shauzia’s frustration grows with each passing day. She is constantly discontent with what life has offered her and wants to escape in search of a better future.

One day, she decides to take up her journey on her own and walks out of the refugee camp to the outskirts of Pakistan in Peshawar. Shauzia is young, fearless, and enthusiastic. She believes that she can earn money quickly, which will help her get to the sea. But to her dismay, she finds it is not as straightforward as she had imagined. She does odd jobs to earn paltry sums of money to buy food, sleeps on the streets, faces dangers of all kinds, and even begs. She feels that what she is doing is below her dignity, but with no other choice left, she ignores these thoughts. Due to an unfortunate incident, she even lands in jail and has to experience the harsh realities of jail life. After facing these extreme hardships, Shauzia returns to the refugee camp.

But her travails are not yet over. Life at the camp is full of challenges, but Shauzia doesn’t give up on her dream of going to France. But this time, the difference is that she figures out the right thing she should be doing in her present to fulfill her dreams of a better future. All this while, Mrs. Weera had tried to explain and reason out with Shauzia how she could prove to be resourceful, but Shauzia had always been absorbed in her world and could never understand the real meaning of Mrs. Weera’s words. Finally, it dawns upon her, and Shauza knows precisely what to do when it does.

It is a story that highlights the struggles of survival and the plight of the refugees. It also brings our attention to all the people constantly putting their efforts into bringing about a positive change in the lives of people and society.