Park Rosenhöhe is a beautiful historic park on a hill in eastern Darmstadt. Because of its rich past, this park serves as more than just a green space for relaxation and leisure. It is also a historical site and has many places of interest for history lovers.

Here are some of the Top 10 highlights of the park:

The Löwentor forms the entrance to the Rosenhöhe. It looks grand with six brick pillars on which are placed six lion sculptures. The gates between the pillars are decorated with relief panels. Grand Duke Ernst Ludwig had the pillars built for the 25th anniversary of the artist colony (Künstlerkolonie ) in 1927. The lion sculptures are called “niesende Igel, “which translates to sneezing hedgehogs.

In 1894, a palace was built by Prince Wilhelm ( who was Grand Duke Ludwig IV’s brother). He is said to have lived there. Later, after his death, the palace was inherited in 1900 by Grank Duke Ernst Ludwig. The same palace was converted into apartments during the 1st world war. But in the air raids of the 2nd world war, the palace got burnt and was eventually demolished. Today, park Rosenhohe encapsulates in itself this piece of history. A hedge outlines the original boundary of the palace, and a portal with a coat of arms signifies the entrance. After entering through the portal, one is greeted with green lawns on both sides, followed by a fountain in front. Today, these remnants are souvenirs from the history of Darmstadt.

The old mausoleum was built in 1826 for Princess Elisabeth in the style of a small Greek temple. Grand Duchess Wilhelmine Luise’s mother had chosen the park as the burial place for her daughter, who had died at the age of 5. Her memorial stone is in the Herrngarten. When the Grand Duchess died in 1836, she was also buried here. Over the years, the mausoleum was expanded, and two symmetrical side wings to the original building were added. Today, the old mausoleum is the final resting place of 12 people from the royal family.

Between 1905 and 1910, Grand Duke Ernst Ludwig had the new mausoleum built in Rosenhöhe Park. After its completion, the coffins of all the grand dukes and their family members were transferred from the tomb of the Stadtkirche Darmstadt to the Rosenhöhe. Grand Duke Ernst Ludwig had his parents and siblings reburied in the new mausoleum, and the coffins of the former regents of the grand duchy and their family members were taken to the old mausoleum. 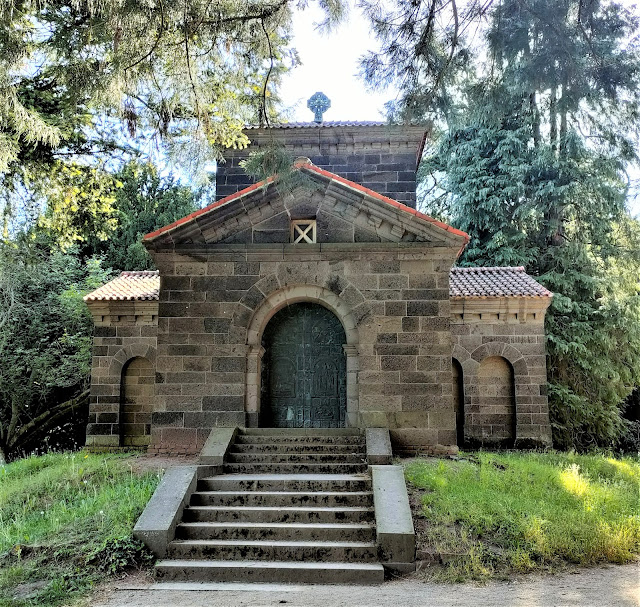 The Spanish Tower is a tower-like building at the edge of the park. Not much is known about its history. It is believed that in the middle of the 19th century, Prince Karl expanded the Rosenhöhe by buying some plots to the east of the park. Among them was this “old tower house.” BS Kulturstifting takes care of the facility and organizes exhibitions and events at this location. More details can be found here:

The tea house is part of the park’s original features. It has a golden crescent on the rooftop and parrot depictions on the balcony. Immediately after entering the park through the lion gates and following the path, one comes across this small yet beautiful structure.

The gatehouse belonged to the former palace (Palais Rosenhöhe). It has been renovated and hosts an exhibition on the history of Rosenhöhe park.

Apart from all the historical structures, the park also has some installations by artists from the modern era. They, too, are worth a visit.

Apart from huge green spaces, and nicely paved paths for walking and cycling, the park features well-manicured gardens in which various species of flowers bloom yearly. In addition, there is a herb garden and a dome (The Rosarium) with roses and other flowers blooming between June and September. Multiple viewing platforms, ponds, and orchards add to the park’s beauty.

Visting Rosenhohe is a marvelous experience. The alternating historical and modern elements in the park in the backdrop of beautiful surroundings contribute to the park’s uniqueness and make visiting the park a sublime and delightful experience.

The best time to visit the park if you want to see all the flowers in full bloom is between June and September. Check out these flower pictures I took when I visited the park in June.

Read my other articles about places to see in and around Darmstadt here.