A Little Piece of Ground-Storyline and Review

A Little Piece of Ground 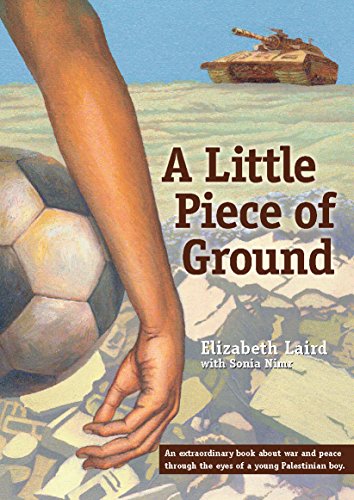 ‘A Little Piece of Ground‘ is a story of a 12-year-old boy Karim, his friends, and his family living in Palestine. The book is based on the conflict between Israel and Palestine. It takes the reader through the lives of the people in Palestine and how they pay the price of the political decisions taken by their leaders.

Karim is a young boy who lives with his parents, an elder brother, and two younger sisters. Karim’s father, Hassan Aboudi, runs a small electrical shop in the town. With tension between Israel and Palestine on the rise, there are regular curfews, which force the family to live cooped up at home, sometimes unable to fulfill their basic needs like steady food supply, medication, etc. Things worsen as the trickle of customers at the shop gradually becomes tinier, limiting opportunities to earn further. Not just in the city, options to fulfill monetary needs are limited in their village too. With their ancestral lands taken away, they have little to expect from village life.

Like Karim, many youngsters grow up witnessing atrocities inflicted on their families and the pains they go through. They become mute spectators to how their dear ones are tortured in prisons, killed in encounters, forced to abandon their lands, and live in poor conditions in refugee camps. This fills them with a feeling of hatred and vengeance. Witnessing the humiliation that his father once faced at the hands of Israeli forces fills Karim, too, with disdain and contempt for the Israelis.

While the adults follow the news and keep themselves updated with all that is happening, as a young child, Karim mostly longs to go out and play his favorite game- Soccer with his friends. He doesn’t even mind going to school, although he doesn’t like it much, as it would be better than being restricted at home. But the school has been bombed, and there isn’t much left. Amid all his boredom and frustration, Karim makes a friend, Hopper, and together, he, Hopper, and Joni ( Karims best friend) get a makeshift football field ready on an unused piece of land. They manage to make a small hideout too and have a good time making the best of what they have. But in a war zone, no place is safe, and misadventures await the boys.

The author has, very finely, intertwined sibling relationships, parental love, and teenage infatuations into a story about war and how it affects children and deeply impacts them. He narrates how ordinary people suffer and live a life of terror in a war-inflicted nation. The story also conveys an important message about the strength that endurance brings and the shame that comes with humiliating others.

It is a powerful book and a sure page-turner. Recommended for young readers- teenage and above.