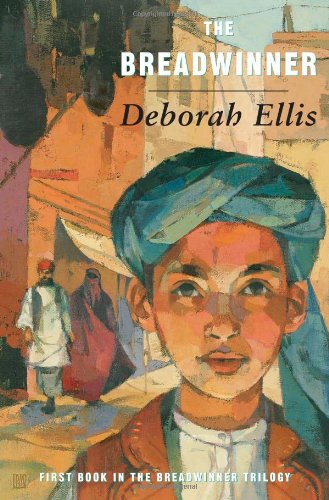 ‘The Breadwinner is a story about a young girl called Parvana, who, under Taliban rule, is forced by circumstances to become the breadwinner for her family.

Parvana lives in a small one-room house in a bombed apartment building in Afghanistan with her parents and three siblings. Things were not always like this for them. Parvana’s parents came from an academic background and used to work and earn well. But due to multiple attacks and bombings, their house gets blown up, losing most of what they had earned. Time and again, the family is forced to change homes. Constant destruction depletes their wealth, and they struggle to make ends meet. To add to the suffering, Parvana’s father loses one leg in a bomb attack, and Parvana’s elder brother, Hossain, gets killed as he mistakenly steps on a landmine.

The Talibs have imposed stringent rules such as a curfew after evening hours, a ban on reading books, watching TV, etc. But the stricter rules are for women as they cannot step out unescorted by a male companion. One day, the Talibs arrest Parvana’s father and put him in jail. Unable to acquire any news about his possible release and with only one male member left in the family, who is still a toddler, the family has no choice but to dress up Parvana as a boy and send her out every day to earn for the family. Pravana is reluctant as she is terrified at the thought of being caught, but she is left with no choice under the given circumstances.

Every day Parvana ventures out in disguise, all on her own, and discovers a new world of freedom that she has never experienced before. With Parvana going out and earning, things change for the family’s good. Parvana even makes a good friend, Shauzia, who, like her, dresses up like a boy and is the provider for her family. But are Parvana and Shauzia happy with the current circumstances? The answer is No. Both the girls pine for a better life and wonder when things will get better and how it will be when they grow up.

This book acquaints its readers with the distressing situation in which people in war-torn countries live and sensitizes them about their helplessness and vulnerability. It highlights the plight of women and children and their hardships. It is also a story of grit, resilience, and courage shown by these people who have become prisoners in their own country.

The book is also about the hope that these people will one day return to the beautiful and peaceful country that Afghanistan once was.

The 2nd book in this series is ‘Parvana’s Journey‘ and the 3rd one, ‘The Mud City.’ Both are worth reading.